Government ownership over the common good to achieve climate justice 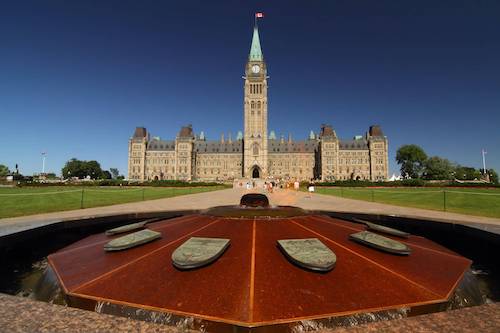 In many ways, this is a hopeful time in Canadian climate politics: the Conservative and Liberal parties have developed comprehensive climate plans, and this spring the Liberals announced $17.6 billion in new spending on climate-friendly measures. For this hope to lead to substantive change, the Canadian government – and future governments – must be willing to make the courageous choices that come with accepting their responsibility to protect the common good.

In the context of climate change, this means taking ownership for limiting temperature increases to 1.5°C. This act would require Ottawa to set bolder national targets for greenhouse gas reductions – while developing enforcement mechanisms and milestone targets prior to 2030. Canadian governments must also stop propping up fossil fuel industries.

Businesses clearly have a role to play in lowering global emissions, but even business leaders agree they need stronger climate regulations to meaningfully lower emissions. The We Mean Business Coalition, which includes more than 700 firms around the world, acknowledges that “the decisions governments make now will lock in the strategic direction of entire economies for years to come.” They’re calling on governments “to put the economy on a positive course to a resilient, zero-carbon future.” These leaders know that their businesses will thrive if governments design policies that hold all corporate actors accountable for the full scope of their impacts.

Households, too, could be a more effective part of the solution – if there were a national entity coordinating their efforts. Businesses and households alike need governments to take ownership of Canada’s net-zero vision.

Currently, that sense of ownership is borne mainly by non-governmental actors and organizations. Environmental champions and resource-constrained non-profit organizations have led change efforts because the federal and provincial governments have failed to invest in the required systems, policies, programs and interventions. Even the new efforts announced in the recent federal budget are expected to, at best, reduce Canada’s emissions by 36% from 2005 levels by 2030. In contrast, the U.K. recently passed legislation requiring emissions reductions of 78% from 1990 levels by 2035. The Liberals’ $17.6 billion in new climate action is equivalent to just 0.25% of Canada’s GDP. According to the Canadian Centre for Policy Alternatives, “we should be spending more like 1% to 2% of GDP per year to aggressively decarbonize.”

Scientists, business and civic leaders, Indigenous Elders and other Canadians have identified the solutions we need to tackle climate change. We have technology that enables us to embrace electric vehicles and wind and solar power, along with emerging technologies to sequester carbon. We have market-based instruments that can reduce the environmental impacts of production. Many of these solutions are being implemented with great success. But we need government action to transform these successes into systemic change.

As an example of today’s responsibility gaps, consider sustainable procurement – the purchasing of goods and services that takes into consideration social, environmental and economic impacts. Generating more than 13% of Canada’s GDP, public sector procurement has the potential to drive impact at scale. The federal government “made numerous commitments to green its procurement dating back to 1992.” Yet a recent study found sustainability has only narrowly and superficially been integrated into public sector procurement. A 2005 Auditor General’s report revealed many challenges, ranging from a lack of central direction to limited use of performance indicators to measure progress. Many of these challenges persist 16 years later, illustrating a lack of ownership from our government.